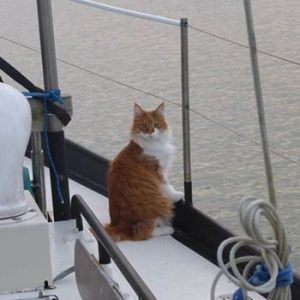 An Auckland, New Zealand, man who spent years building his own boat, plans to sail the world with his cat named Strauss von Skattebol of Rebelpawz, or Skatty for short.

According to Newshub, who spoke with Paul Thompson, it all started with a bet.

“My brother-in-law one day said to me, ‘Paul, you’re always talking about building a boat and going sailing,” Thompson told Newshub. “But you never do anything … I bet you a dinner at any restaurant of your choice that you will not have started building the boat by the end of this year.”

“If anybody had told me how hard it was going to be, I would have bought my bother-in-law his dinner,” he joked.

Now, he has a boat and an adorable “pedigree polydactyl Maine Coon,” according to Facebook, who helps him on board in unique ways. 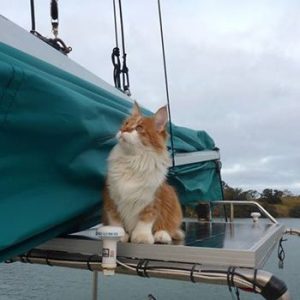 “When people come alongside, or other boats go past, as soon as that happens he’s alert, looking around, and if he knows the boat he’ll even come outside,” Thompson said, “Which for me is wonderful, because I sit down below, and basically I’m completely oblivious to what goes on on the deck.”

Sailing the world, he said, is now something Thompson needs to do. “If I don’t do it,” he said, “I’ll live the rest of my life regretting that I didn’t do it.”

While it’s not clear when their journey would start, it’s evident from the cat’s Facebook page that the feline is ready to set sail (a scratching post that his Dad made, above, is ready too). 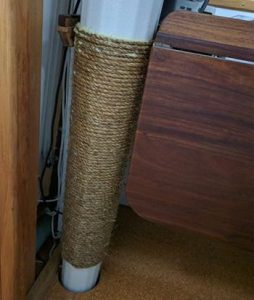 Click Here to Read the Full Article on People.com