Hi everybody! It’s me again, Max Allen and my brother Bruno Peter and our big sister – well, older sister, because we’re bigger than she is. Mommy calls us the “kitty boys.”And Cody, well Cody is really a “diva.”

In Chater 1, I told you how I was ‘dopted (I love that word!) from living at NNAH, and then I got a brother that the Mommy-Human ‘dopted and named Bruno Peter, after the “big boy” Peter died, and how I met my sister Cody Renee. In Chapter 2, we wrote about “moving.”

Cody has told me that there’s been a lot about me and Bruno and that she wants to tell her story, too. So, to be fair, we’ll do that! Cody Renee was also ‘dopted from living at NNAH. She was a little kitty, maybe three months old and was up for adoption with her two brothers. OK, here she is….
Hi everybody, I’m Cody Renee and my Mommy says that I’ll be 18 years old in April. Wow! I think that’s pretty old…oops…I mean “senior.” I think that now, my age is about the same as a human who is around 80-85 years. That’s more “wow!” But, I can run really fast and I’m very limber, not like your average elderly human, at all. But, I do like to nap a lot and lap milk from my little bowl!

I was part of a litter of three little kittens and we were surrendered, whatever that is, to NNAH in July 1999. It was just me and my two brothers. Our birthday was in April 1999, so we were pretty young.

Mommy came to the hospital. It was because her very elderly lady cat, named Pookie Madeleine, had died at the age of nearly 20. It was very, very hot that summer, and the apartment wasn’t air conditioned and Pookie started to fail. She couldn’t eat, she had a hard time walking, or even moving, and then it was hard for her to breathe. Mommy knew that Pookie was dying, so it seemed better to be able to hold her and cuddle her at NNAH as she went to her final sleep and to kitty heaven.

Mommy was grieving, but I learned that there was a “sister” cat still at home, named Sheba Elizabeth, who was about 11 years old. Sheba was bonded to Pookie and they were BFF’s. Mommy wanted a new friend for Sheba, who would now be lonely. It was to be me! I was so excited that I would have a home and really hoped that my two brothers would have one soon.

Now, I’m all black and slinky and I have green eyes. Sheba was all black and slinky, with yellow eyes! We were a purrfect match! Sheba was my first big sister and I was supposed to learn a lot from her. Mommy has told me and the “kitty boys” that I was the worst behaved kitty that she ever had…EVER! I think that Sheba, for the first three or four months, also thought that I was naughty. But, I had to learn; I was just a baby!

First, the apartment had big windows with horizontal “venetian blinds,” the kind with fabric taping at each side. It was just so much fun to climb the blinds late at night on the tapes. I would hang on by my claws and go all of the way to the top, and they rattled and always, the Mommy awakened! She was not happy, because she’d have to get out of bed, put a chair by the built-in window area cover over the heating pipes, then climb up on it and gently rescue me. Well, I did that every night, because it was lots of fun, like being a circus person except that I was too little to get back down! Meow…Cirque du Soleil?

Even Sheba was getting annoyed with me. She would sit and watch as Mommy came over to rescue me. Sheba never told me not to climb and she didn’t try to rescue me. She just looked grumpy at me. I learned how to “look grumpy” from Sheba and I use it with the kitty boys. Anyway, I climbed the tapes for about two months, and the last time – when I still needed to be rescued – I was then sitting by Mommy, but Sheba turned into a “big sister!” She bopped me with a front paw (but no claws) and hissed at me and flattened her ears back. Uh-oh, I guessed that I shouldn’t climb any more.

Sheba and I had good times together as I grew up into a “grown-up cat.” We played on the bed, and climbed chairs, and rolled under the bed, ran around the apartment and played in empty shoe boxes and took long naps curled up together. When we did that, with our eyes closed, Mommy couldn’t tell who was who, because I had grown to be Sheba’s size. And, Mommy bought a through-the-wall A/C unit. The apartment could now be cool.

There was a lady who lived at the end of the hall, and she had a little girl who was almost three. Every school day, when they were coming home from day care, the little girl would softly knock on the door. I knew that it was her, because the knocking noise was only about three feet above the floor. Mommy opened the door, and the little girl called me “Coldy, Coldy”and patted me. It was nice. Then, she went with her Mommy.

When I was three years old, there was a terrible night. Mommy was watching a movie and all of a sudden Sheba went into what was called a seizure! It was so scary and I watched. Mommy grabbed Sheba and put her into a carrier, and left. Hours later, Mommy came home without Sheba. The cause of the seizure – and it was a first-time ever – was not known. Sheba had died. I knew that Mommy was upset, but Sheba was my big sister and BFF. I was frightened and sad. I wandered the apartment all night, and wailed loudly, and looked under the bed and in closets and everywhere. I thought that if I looked and cried, Sheba would come back. Finally, I got on the bed…I was so sad. Sheba was gone.

The next day, I didn’t want to do anything; eat, or cuddle with my Mommy, or look out of the windows. She went out for hours, and when she came back, she had a beautiful girl Tuxedo cat with her. “Dinah Marie” was ‘dopted to be my new big sister, because otherwise I would be lonely. She was five years old and had been at CACC for two months. That meant that she’d be sent to a shelter, or “euthanized.” What’s that? Dinah hid under the bed for a week. I peeked, and she stopped being so afraid. It turned out that she was really nice, and she washed my face like Sheba used to do. I still missed Sheba, but I had a new friend and Dinah had a home.

Three years later, Mommy went to CACC to donate a bag of kibbles that Dinah and I didn’t like (they were icky and too crunchy). She was talking to the volunteer, who remembered her as ‘dopting Dinah. She said, “Have I got a boy for you!” Mommy said, “no, no,” but the lady brought out a big, beautiful all white boy…a Norwegian Forest Cat. The lady said, “Should I start the paperwork?” Well, you know what Mommy said, and Peter Timothy came to be our brother.

He..was…fun! Dinah was mean to him for five months (I think that she was jealous!) and then, he and Dinah were really best friends after six months, and he liked me a lot, too!

Dinah died, at NNAH, in April 2012. She was 15 years old and I missed her a lot, like I missed Sheba. Peter became my BFF and every morning, he gave me a face wash and purred. In December 2012, Max Allen came to live with us, and oh, he had a LOT to learn from Peter! Max was only about 15 months old when he came. He was much more of a bratty kitty that I ever was, but he learned from Peter.

And then, the circle continued. Peter died in January 2014. It was terrible, because it was a slow acting neurological death. I cried and I was so sad. I had lost Sheba, and Dinah and now Peter. Max didn’t quite realize that Peter was dead in the kitty bed. He was cremated and his ashes were sprinkled on a friend’s garden, which was the “kitty cemetery.”Peter was with Dinah, again. The next month, Mommy ‘dopted Bruno Peter to be Max’s kitty-bro.

Things are pretty normal now. Max and Bruno are totally silly, and run around the apartment, and do dumb things – like chase me. I like to take naps, and sit on Mommy’s lap and enjoy my days. I’m pretty healthy, at almost 18 years. I’malways thankful that I have a safe and warm home. Please adopt a fur baby; you’ll be glad that you did. 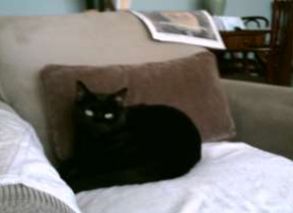 This is me! On a big chair, relaxing! 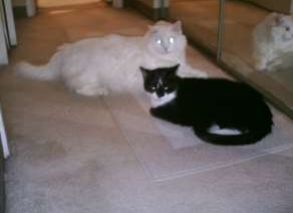 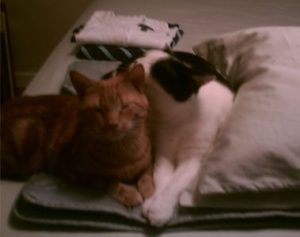 These goofy guys are Max and Bruno!

Request Your Appointment Today!
(312) 944-5350
Call Us!
Font Resize
Contrast
Accessibility by WAH
Call Us Text Us