That’s US! Max and Bruno!

We’re both going to tell you about Mommy’s kitty rescue. So, there!

On a Friday late afternoon ten days ago (…see, cats are smart!), Mommy came home and a neighbor talked to her outside of the front entrance. The neighbor had been told that a cat – or kitten – was trapped in a snow-blower in the dumpster area of the high rise apartment building on the other side of the elementary school. They went over there immediately.

When they arrived, a couple who live in that building was on the phone with 311, trying to arrange for CCAC to come and to help. The people had to leave, but Mommy and her friend stayed and a man – who also lives in that building – started the work of the rescue. The friend watched while she held her little doggy. Mommy and the man had to pull dumpsters out of the way, and remove big heavy planks that were laid on top of the dumpsters and the snow-blower. They could hear the cat….maybe a meowing kitty? They saw it too, just the rear paws and the kitty was IN the opening to the machine’s engine. Finally, the man was able to reach down, but the kitty ran and disappeared in the landscaping bushes along the side of the building. Then, it ran back to the snow-blower and hid again!

Mommy was stunned, but she doesn’t give up, especially for cats and doggies! She talked in soft language to the kitty…and was able to reach down and pat it. The kitty ran again, along the same route. Mommy expected the “return trip” and reached behind the bushes and grabbed the kitty by the loose skin at its neck. She nestled the kitty on her shoulder while she held it. The kitty…and it was a baby, seemed comforted.

Mommy went inside our building and explained the little baby to Carolyn, the Security Guard on-duty. Mommy went upstairs, and put the kitty in our big carrier with a fluffy towel to make it comfy. Then, she fed it some food – the baby kitty gobbled it up! And, Mommy gave it water, too. She took the kitty back downstairs in the carrier.

​​​​​​​The kitty was a “tabby,” so Mommy named her Tabby. It was a girl baby-cat, because Mommy checked and also checked for fleas. Not noticed on inspection, but there was maybe a slight eye infection. People looked at the kitty in the carrier and “oh’ed and ah’ed.” Carolyn started to really look at it…the kitty was feisty, and wanted more food, and wanted to be stroked. Mommy made a “sort of litter box” out of a shoe box. The shoe box itself to hold the litter, and the box lid, because it was shallow, would be where the kitty could “go.” Tabby was really little, and only seemed about two or three weeks old. She was very hungry, and Mommy and Carolyn guessed that Tabby hadn’t eaten anything in two to four days. Well, Carolyn fell in love totally with the kitty, and decided to adopt Tabby. 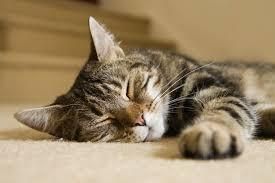 This is Princess Asleep!

The next day, Carolyn took Tabby to a Veterinarian. He said that the baby cat had a slight eye infection and gave it medicine. He also guessed that it was really about five or six weeks old, and so thin because she hadn’t eaten for several days. He guessed that the kitty ran back into the snow blower because the Mommy cat put her there, and the Mommy cat did so because of the eye infection. If there were other kittens, their eyes wouldn’t be infected. Mommy cats know that.

Carolyn’s two older sons re-named the kitty to “Princess.” That fits! Carolyn shows Mommy videos of the kitty on her phone, too. Princess is growing, and playing like….well…a kitty! Mommy had extra toys that she gave to Carolyn for Princess; squeaky mice and other toys, a soft and plush “house” in which Princess can sleep and hide. Also, because it’s important – a scratchy-pad. Oh, Princess loves that! There were some extra cans of food, and a kitty bed….Princess has it made.

The funniest video is of Princess running around in the bath tub…and the climbing the shower curtain to leave the tub. What a smart kitty! And, cute! Carolyn’s sons just watch Princess play. Carolyn said that they’re actually afraid of Princess. Mommy suggested that Carolyn get another kitten, so that they can be friends growing up together. And, that the boys learn to pat Princess and to not be afraid. We’re really happy for the little cat, and we want Carolyn to adopt another kitten so that they can be buddies…like the two of us! It may be a financial consideration for Carolyn, but Mommy knows people in management roles at the humane societies…maybe she can manage a “deal” for Carolyn. Or, maybe there’s a kitten to adopt at Near North?

Request Your Appointment Today!
(312) 944-5350
Call Us!
Font Resize
Contrast
Accessibility by WAH
Call Us Text Us