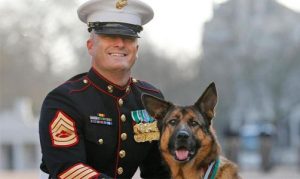 Gunnery sergeant Christopher Willingham, of Tuscaloosa, Alabama, USA, poses with US Marine dog Lucca, after receiving the PDSA Dickin Medal, awarded for animal bravery, equivalent of the Victoria Cross, at Wellington Barracks in London, Tuesday, April 5, 2016. The 12-year-old German Shepherd lost her leg on 23 March 2012, in Helmand Province, Afghanistan, when Lucca discovered a 30lb improvised explosive device (IED) and as she searched for additional IEDs, a second device detonated, instantly loosing her front left leg. Lucca completed over 400 separate missions in Iraq and Afghanistan during six years of active service protected the lives of thousands of troops, with her heroic actions recognised by the UK’s leading veterinary charity, PDSA, with the highest award any animal in the world can achieve while serving in military conflict. (AP Photo/Frank Augstein) THE ASSOCIATED PRESS

LONDON (AP) — A U.S. Marine Corps dog that sniffed out explosives and protected thousands of troops has been honored with a prize for animals serving bravely in military conflict.

Lucca, a 12-year-old German Shepherd, won the Dickin Medal, the animal equivalent of the Victoria Cross, a decoration for bravery. She is the first U.S. Marine Corps dog to receive the honor.

Lucca is credited with saving thousands of allied troops and never had a human casualty on one of her patrols. On her final patrol in Afghanistan, she discovered a 30-pound (13.6-kilogram) improvised explosive device and was searching for more when a second device detonated. Lucca lost her left leg, but survived.

Her owner, Gunnery Sergeant Christopher Willingham of Tuscaloosa, Alabama, was by her side Tuesday in London as she received the medal.

Copyright 2016 The Associated Press. All rights reserved. This material may not be published, broadcast, rewritten or redistributed.